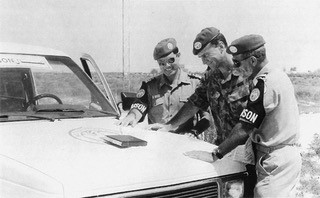 Peacekeeping in the Sinai Egypt in 1993

After twenty four years as an senior officer in the Australian Defence Force and twenty one years in parliament, most of that time as a minister or spokesperson for defence industries, I am  of the view that while the ADF exists to defend the nation, defence budgets must simultaneously build the nation’s soft power by creating resilience, self-reliance, industrial and technical capability and by retaining and building wealth and capability at home. Neither the ADF nor its fighting capabilities should be dependent on any other nation, friend or foe, to accomplish their mission.

An ADF which cannot as far as is practicable independently build, operate, repair and sustain its ships, aircraft, weapons, combat and intelligence gathering systems cannot be relied upon defend the nation. Where systems are of such complexity that an overseas build in unavoidable the ADF must at least be able to operate, sustain, deploy, repair and redesign the capability without dependence on any foreign government or company. International primes providing key ADF capabilities must be within the control of the Australian Government in peace and war and must retain within Australia the full suite of capabilities needed to sustain its products without referral to a foreign government or head office.

As Minister for Defence Industries, I had an opportunity to play a significant role in ensuring that the future submarines were built in Australia and not imported from overseas. I played a crucial role in SA’s bids for the future frigates and the Land 400 combat vehicles along with a host of other projects. I visited all the major submarine and future frigate proponent shipyards, met with the companies, had responsibility for the operation of Tech Port including the eventual sale of the facility to the Commonwealth. Martin was responsible for the SA Defence Agency and its advisory board and for the state’s participation in an array of international expos and events.

Apart from defence industries I have a particular interest in defence policy and Australia’s involvement in the Middle East, the Indo Pacific, Southeast Asia and China and in the US Alliance. Further interests include special forces and special operations, counter terrorism, submarines and warship capabilities, guerrilla warfare and strategic deterrence.